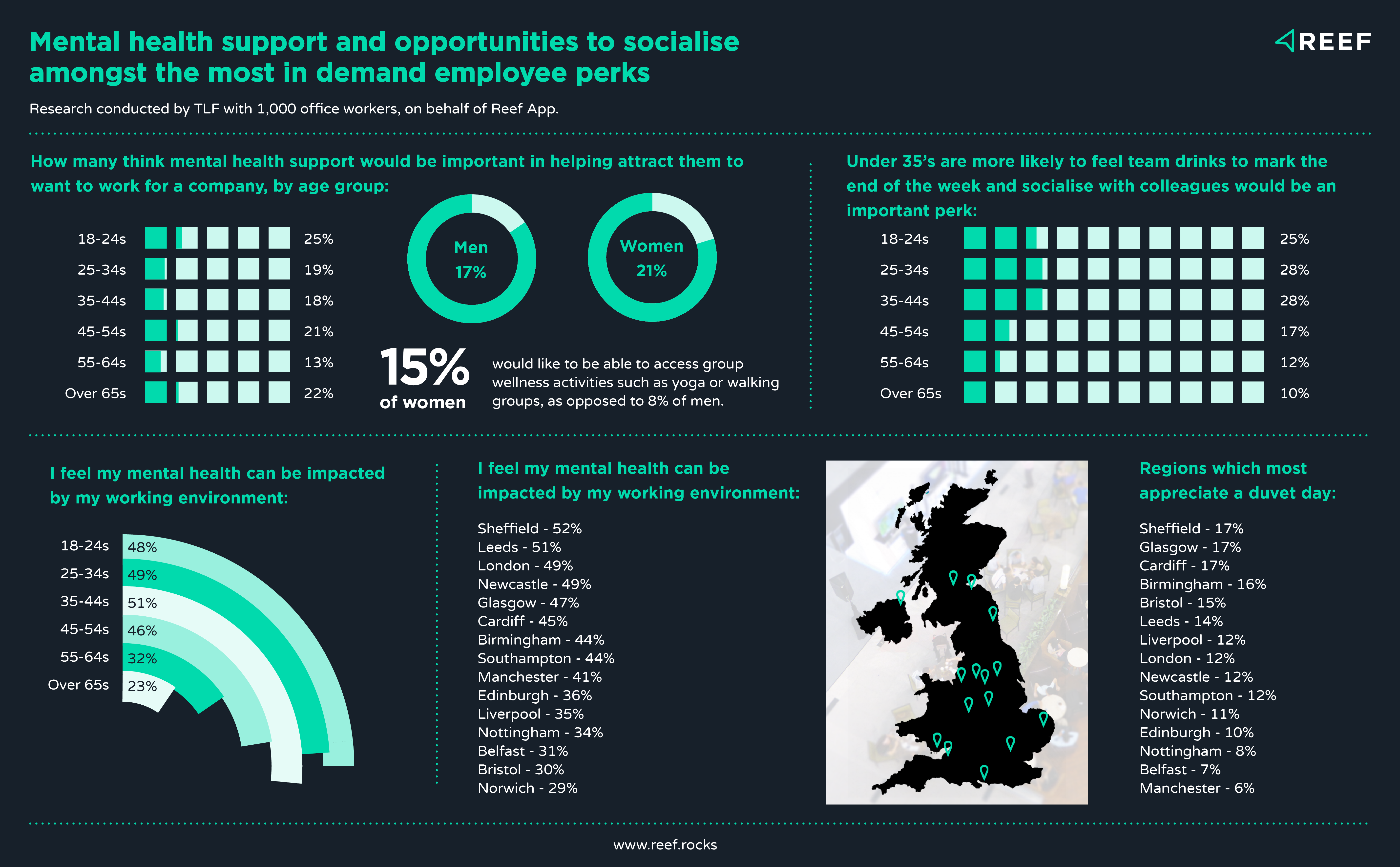 As companies continue to report difficulty attracting new members of staff, whilst also tackling ‘The Great Resign’, how can businesses encourage potential employees to want to work for them?

According to new research, one in five workers (19 per cent) say if a workplace offers dedicated mental health support, they’d be much more likely to consider working for them.

In an independent survey of 1,000 office-based workers on behalf of third workspace facilitator Reef, respondents were asked which perks would be most appealing in terms of encouraging them to want to work for an organisation.

Whilst flexible working (47 per cent) and hybrid working (41 per cent) topped the list, mental health support followed as a key benefit. Having the opportunity to get involved in group wellness activities, such as walking or yoga, was felt to be particularly important for female employees, with 15 per cent saying that would be appealing to them.

Wellbeing in general proved twice as popular as having ‘cool’ office facilities such as mini pubs or games areas (both 10 per cent). However, having spent much of the last 20 months isolated from our colleagues, the Reef research did show that people are ready to reconnect as a team again. Drinks hour on a Friday and Christmas parties still ranked highly as benefits to be enjoyed, for 21 per cent and 17 per cent respectively.

Almost half of the office workers who responded to the survey said their working environment has a serious impact on their mental health (44 per cent). One in four (26 per cent) said their productivity varies greatly depending on their surroundings and having the opportunity to work in different environments is important. Only 11 per cent said they are already back in the office full time – or expect to be in the near future.

Interestingly, despite the pandemic promoting a boom in pet ownership, only six per cent said being able to take their pet into work was something they’d be looking for.

Professor Cary Cooper of the ALLIANCE Manchester Business School, President of the CIPD and professor of organisational psychology at the University of Manchester, commented: “A genuine focus on wellbeing and psychological support is going to be key if businesses want to attract and retain the best staff going forward. It can’t just be lip service or things like sushi being delivered to your desk, which are nice to have but don’t make a real difference to an employee’s quality of life. As with most things, much of what will be right for individuals is down to personal preference and also what life stage they are at, but it’s clear from the Reef research that mental health and wellbeing support is so important. Flexibility of when and where people work, along with a recognition that people have a life outside of the workplace, is vital.”

James Coughlan is the founder of Reef, an app which connects businesses with free facilities which can be used as a third workspace for employees, such as cafes, hotels and other venues. He said: “So much has changed in the world of work over the last 20 months, we wanted to get a better idea of what is appealing to workers, given there’s lots of companies struggling to recruit. Our research showed that one in 10 (10 per cent) feel their mental health is negatively impacted by working full time in an office, whereas one in 14 (seven per cent) say working at home has a negative impact on them. This demonstrates that flexibility and choice is going to be key and there is no ‘one size fits all’ preference – which is one of the reasons we launched Reef. People need to be free to choose the workspace which is most convenient and productive for them.”

Reef enables hospitality venues across the world to register their available workspaces on a real time basis. Workers at subscribing businesses can then book spaces as they need them, to log on and work in a more inspiring environment, or to catch up with colleagues or clients. This is very important for them to look for the perfect environment.

James continued: “It’s reassuring to hear that socialising with colleagues is something people are still keen to do. It’s definitely less about having a cool office with a beer fridge or a ping pong table to gather at, and more about catching up for a coffee and chat in a local cafe or organising a get together once a week that people have the choice to attend. It’s important for people’s mental health that they have the opportunity to socialise if they wish to – but we’ve moved beyond a ‘cool’ office being the way to get the attention of a potential new employee.”

Professor Cary Cooper added: “It is important in this hybrid world of work that people do get together from time to time to socialize, team build and develop new products and services, whether in an office or in remote third workspaces. Flexibility means just that, ownership on your time and place.” 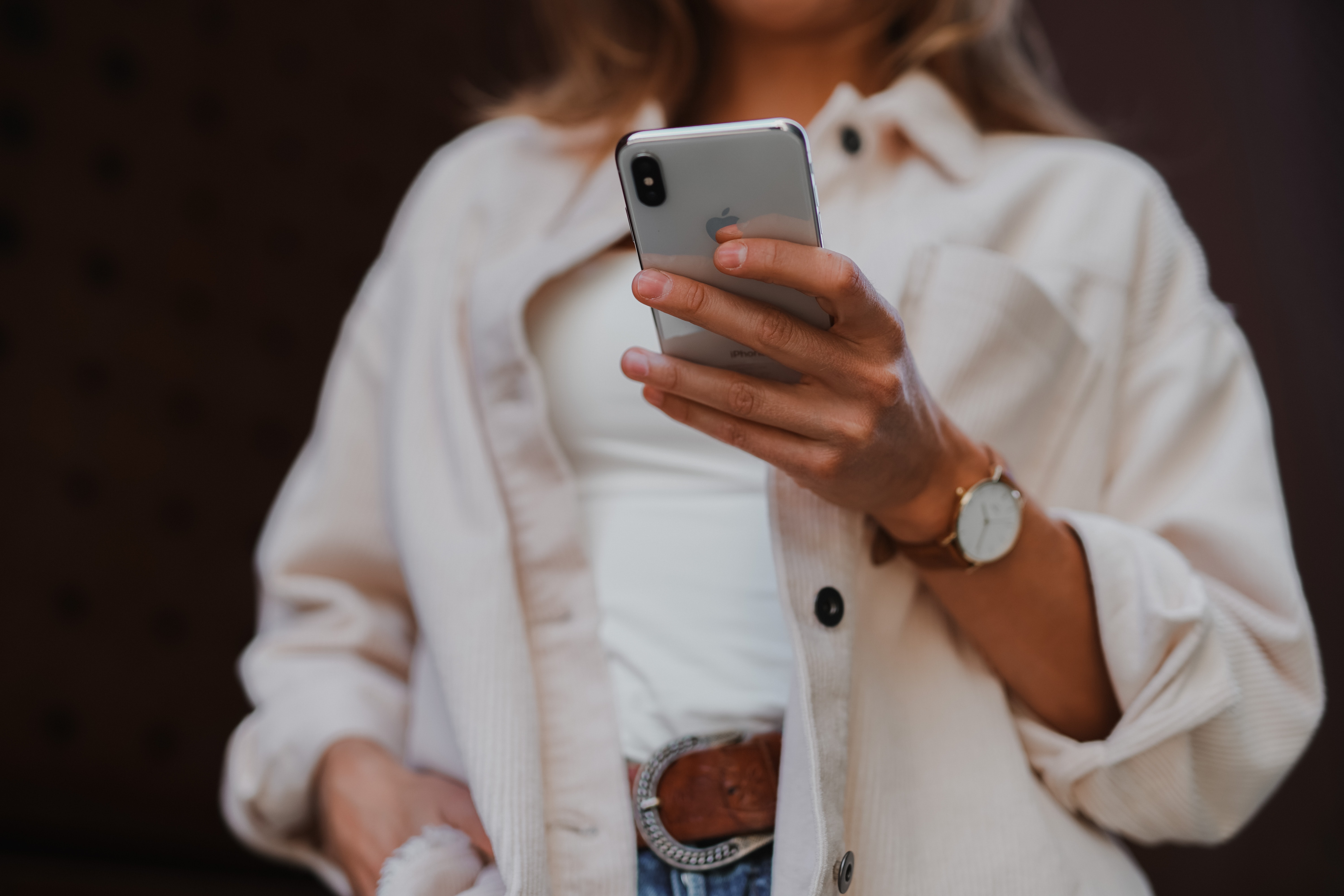 Reducing costs for the hybrid workforce 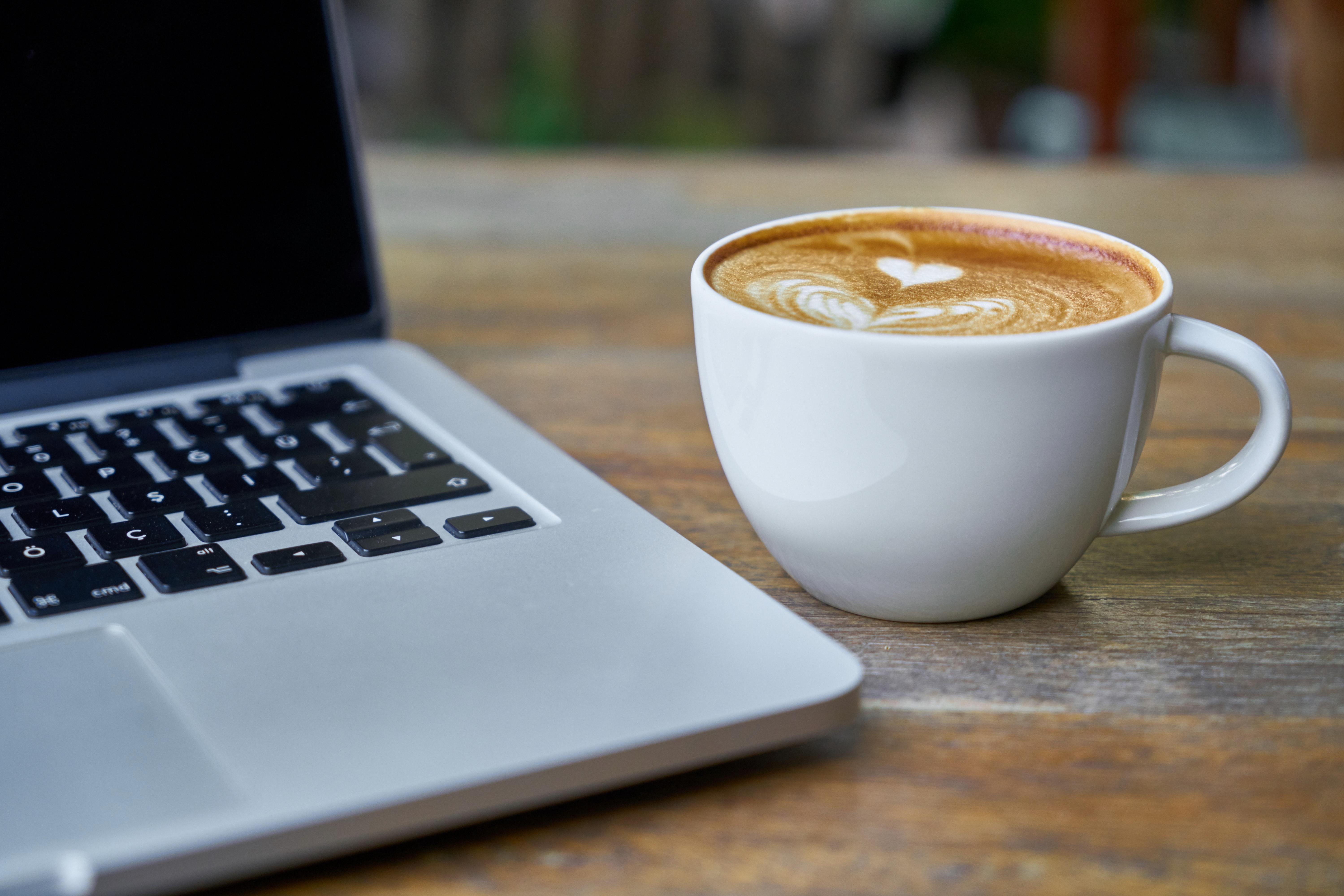 7 Tips to Stay Productive at Work 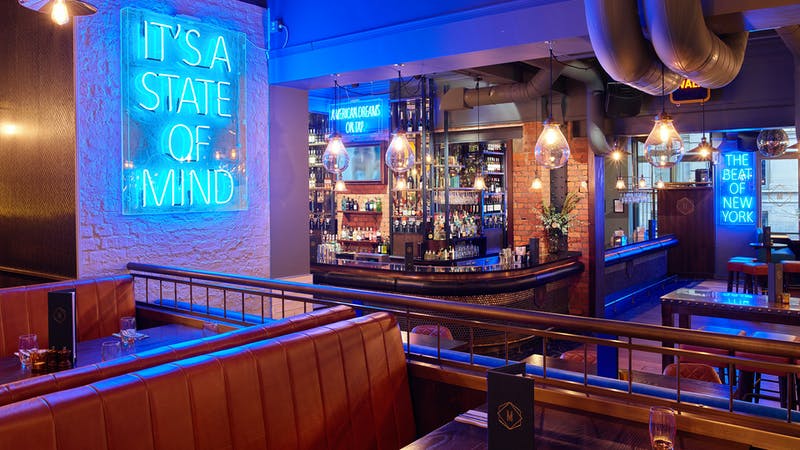